Joseph Nguyen was born in Vietnam and was raised in a devout Catholic family. His father was killed when he was 13 by the rebels from the north and his mother was left alone to raise him and his sisters. She instilled in him a deep faith in God and love of the blessed virgin Mary. He joined the South Vietnamese Army and served as a medic. After the war, he was sent to a “reeducation camp” in order to be brainwashed by the communists, however, his faith remained stronger than ever. He and his wife had 10 children and he tried to help them escape many times. Finally, 3 of their children escaped in a boat and were rescued by a fisherman after being at sea for 15 days. Since their father served in South Vietnam’s military, those running the refugee camp gave them permission to immigrate to the United States of America. Those three children became American citizens and were able to apply to the consulate of Vietnam to get almost all their remaining family members to the United States. It is a story of tremendous heartache and pain, suffering and persecution. Yet, Joseph’s strength lay in God the Father, who he reflected to his beautiful family. They in turn were given strength to trust throughout the difficulty in God as both their father Joseph and St. Joseph did.

Joseph and his wife have been parishioners at SJB for about 4 years. He had been ill with cancer for the past few years and suffered tremendously. Yet his faith continued to remain strong. He regularly received the Eucharist and was anointed a few times throughout his battle with cancer. His faith also inspired Tien, his son-in-law, to become Catholic. Tien was baptized at the Easter Vigil and received the Sacrament of Marriage this past Saturday. Sadly, this past Tuesday, Joseph passed away. We now pray that he is with St. Joseph and the Saints in Heaven.

I learned a lot from Joseph, even though he spoke very little English. He lived out of a generous spirit and loved God and his family before himself. He taught me that faith and family are to be our top priorities. We are made to live in relationship with God and others as we must work to build and strengthen those relationships. He valued freedom and helped me to understand how we should not take freedom of religion lightly. We are free to worship, and we must practice our faith, regularly and devotedly. 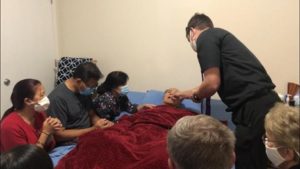 For the past 3 years, Joseph had been asking me to bring my parents to visit him and his family. I realized it was really him desiring to live out of a generous spirit and show kindness to my parents. Finally, this past Sunday, I was able to have my parents join me on a visit to his home. We prayed with him as he laid dying in bed. I gave him Viaticum, which is Eucharist for the last time. I was there next to my parents, along with 5 of his children. It was a beautiful moment of prayer that reflected the true universality of our Catholic faith. I led the Our Father in English and then I asked them to pray the Our Father in Vietnamese. Even though we do not speak the same language, we were praying to our one Father, who unites us in the Holy Spirit through love. It was one of the most memorable moments for me in my almost 7 years as a priest. While I am very saddened by his death and his loss to our parish community, I am hopeful that we have an intercessor in Heaven.

Although I did not know Joseph very long, he has had a tremendous impact on me, and I was very moved by his deep faith. I saw Jesus the Good Shepherd in him, and I felt so comforted by that. When you and I live the faith generously and devoutly, we help others encounter the goodness of God as Joseph did.

As we reflect on the Good Shepherd this Sunday, we desire to give thanks to God for your participation in his ministry this past year. With your support and commitment to SJB we have been able to let the bright light of Christ shine in New Brighton and beyond. Mary May, our Development Associate, will speak at the end of all our weekend Masses and have a gift for you in the plaza as you leave church. Thank you for your commitment to SJB! Check out the video from Mary by clicking here.

Prayers for my Nephew

I will be flying out to Cleveland, OH today to baptize my brother Dominic’s son, John Lewis Shovelain. Please pray for him as he receives the Sacrament of Baptism tomorrow!